Netflix’s introduction of the new Qwikster structure was a multi-billion-dollar failure.

In 2011, Netflix, the USA’s largest online DVD rental and internet streaming company, faced a dilemma. Internet streaming of movies was clearly a growth business, one which competitors such as Amazon were beginning to enter. On the other hand, DVD rental by mail was facing long-term decline. In September 2011, Reed Hastings, CEO and joint founder of the company, responded to the dilemma with a structural solution. He proposed to split his business into two separate parts: henceforth streaming would be done exclusively under the Netflix label, while DVD rental would be done exclusively in a new organisational unit called Qwikster. In a blog post, Hastings explained his motivation:

‘For the past five years, my greatest fear at Netflix has been that we wouldn’t make the leap from success in DVDs to success in streaming. Most companies that are great at something – like AOL dial-up or Borders bookstores – do not become great at new things people want (streaming for us) because they are afraid to hurt their initial business. Eventually these companies realise their error of not focusing enough on the new thing, and then the company fights desperately and hopelessly to recover. Companies rarely die from moving too fast, and they frequently die from moving too slowly.’

There were other reasons for the proposed split. The DVD business requires large warehouse and logistics operations, while streaming requires large internet resources. For DVDs, competitors include Blockbuster and Redbox, whereas streaming rivals include Amazon, iTunes and cable TV companies. As a standalone unit, managers in the streaming business could promote their alternative model without worrying about protecting the DVD business, still the larger part of Netflix’s profits overall. For customers, though, the split was less attractive. In future, customers would have to deal with two sites to get what they had previously got through one site. The DVD site offered many more movies, and tended to have more recent releases. Movie viewing recommendations for one site would not transfer to the other site. DVD renters would no longer receive the distinctive Netflix DVD envelopes which had strong brand loyalty. The customer response was hostile. In the month following Qwikster’s launch Netflix lost hundreds of thousands of subscribers. The Netflix share price fell more than 60 per cent, wiping out more than $3 bn in value. CEO Reed Hastings joked in a Facebook message that he feared poisoning by some of his investors: ‘I think I might need a food taster. I can hardly blame them.’

On 10 October 2011, three weeks after the original Qwikster announcement, Hastings blogged that the new unit would not go ahead after all, and that all business would continue under the Netflix label. Hastings explained: ‘There is a difference between moving quickly – which Netflix has done very well for years – and moving too fast, which is what we did in this case.’ Despite his reversal of the structural change, repercussions were still being felt a year later: Netflix’s market share of DVD rentals in 2012 had dropped from 35 per cent to 27 per cent, and rival Redbox had taken market leadership.

1 How do the pros and cons of the Qwikster structure fit with those associated with the divisional structure (see section 10.2.2 )? 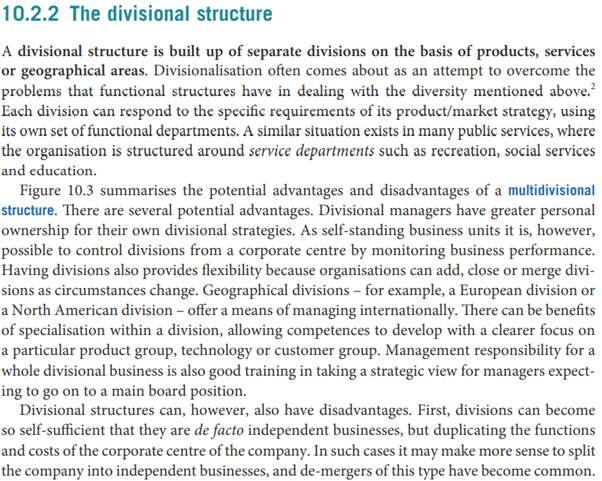 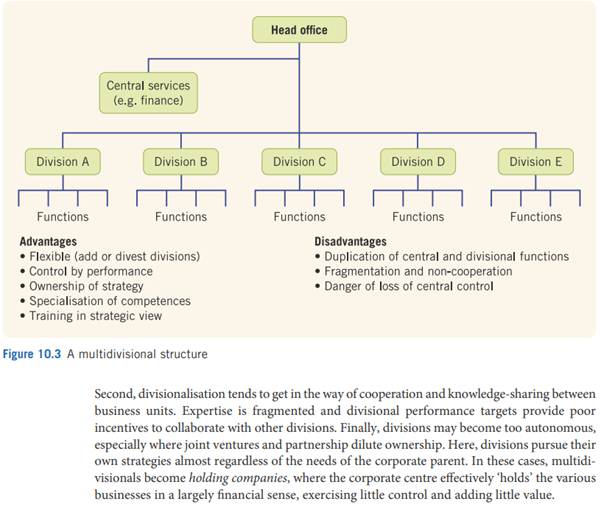 2 In the light of the planning, cultural and targeting systems (discussed in section 10.3 ), what else would Netflix have needed to do to manage the separation of the streaming business and the rental business?