Factorial designs have been used in forestry to assess the effects of various factors on the growth behavior of trees. In one such experiment, researchers thought that healthy spruce seedlings should bud sooner than diseased spruce seedlings (“Practical Analysis of Factorial Experiments in Forestry,” Canadian J. of Forestry, 1995: 446-461). In addition, before planting, seedlings were also exposed to three levels of pH to see whether this factor has an effect on virus uptake into the root system. The following table shows data from a 2

3 experiment to study both factors: 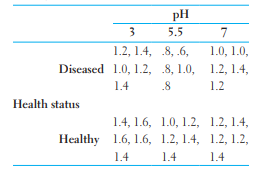 The response variable is an average rating of five buds from a seedling. The ratings are 0 (bud not broken), 1 (bud partially expanded), and 2 (bud fully expanded).

a. Using a significance level of 5%, conduct an ANOVA test for this data. Indicate which factors are significant and whether the interaction term is significant.

b. Create an effects plot for the factors that were found to be significant in part (a).

c. What conclusions can you draw regarding the effects of the two factors on bud rating?

Factorial designs have been used to study productivity of software engineers (“Experimental Design and Analysis in Software Engineering,” Software Engineering Notes, 1995: 14–16). Suppose that an experiment is conducted to study the time it takes to code a software module. Factors that may affect the coding time are the size of the module and whether the programmer has access to a library of previously coded submodules. Module size is studied at two levels, large and small, whereas access to a library of submodules is either available or not. After running a two-factor design on sample modules, suppose that the interaction between module size and library access is found to be significant.

a. If the goal is to reduce coding time, describe the conclusions you can draw from the experiment if the interaction plot looks like this: 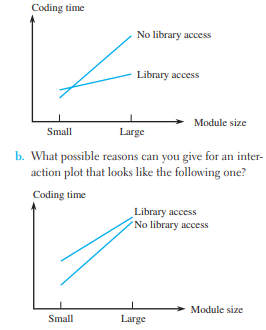