Cooperative agreements in mobile payment systems may leave some players out.

The opportunities in mobile payment systems (‘mobile wallets’) attracted a very wide range of competitors and approaches. In 2011, the value of mobile payments worldwide was $240 bn, a sum expected to triple in the following five years. Companies which could skim even a tiny percentage of this total through offering mobile payment services could earn fortunes. Moreover, they would have access to valuable data about which consumers bought what, where and when. It was hardly surprising that companies as diverse as Google, Apple, Facebook, PayPal, Visa, Barclays and BlackBerry were crowding into the new market, each with its own particular systems. Indeed, the diversity of possible systems was creating confusion, with retailers and restaurants hesitating to adopt before seeing which system would finally come out on top.

One important initiative was ‘Project Oscar’, a joint venture launched by the United Kingdom’s three leading mobile phone operators Vodafone, Telefónica’s O 2 and EverythingEverywhere, the merged businesses of DeutscheTelekom and France Telecom. Project Oscar involved giving customers SIM cards that would allow them to store debit and credit card details on their phones and pay for goods or transport either online via their mobile or by tapping the handset on a special reader at the till or ticket barrier, using Near Field Communication (NFC) technology. This contrasted with the Google system, for instance, which involved getting a whole new phone. The three partners in Project Oscar declared:

‘If approved, the joint venture will benefit UK plc as a whole. It will promote competition by bringing together the necessary scale to offer a credible alternative to the established online payments and advertising platforms offered by large US-based internet players.’

But not everybody was happy at the prospect of the dominant phone operators collaborating in this way. The United Kingdom’s fourth mobile phone operator, Three, complained:

‘The JV (Project Oscar) will control and sell access to over 90 per cent of UK mobile subscribers and their data, thus allowing Deutsche Telekom, France Telecom, Vodafone and Telefónica to foreclose the market to third-parties and neatly do away with the inconvenience of competing with each other.’

In April 2012, with the support of Google, Three successfully referred the joint venture to the European competition authorities. The European Commission investigated, aware of a long history of illicit collusion between the various mobile phone operators in Europe. However, the Commission came down in favour of Project Oscar. It declared:

‘As a result of its in-depth investigation, the Commission concluded that the joint venture will not likely lead to a significant impediment to effective competition in the EEA within the meaning of the Merger Regulation. The market investigation revealed that a number of alternatives already exist and much more are very likely to emerge in the near future to ensure adequate competitive pressure on the joint venture’s mobile wallet platform. Some of these alternatives may rely on a secure access to the SIM card of the mobile handsets in order to store sensitive data like bank account numbers, etc. This access will be controlled by the mobile network operators, including in particular the three parents of the joint venture. However, other alternatives exist which do not store sensitive data on SIM cards and it is unlikely that the creation of the joint venture will allow the parent mobile network operators to block these alternative routes to market using technical or commercial means.’

1 In terms of Figure 5.8 , what are the benefits to the Project Oscar partners of collaboration?

2 What options are available now to the excluded Three? 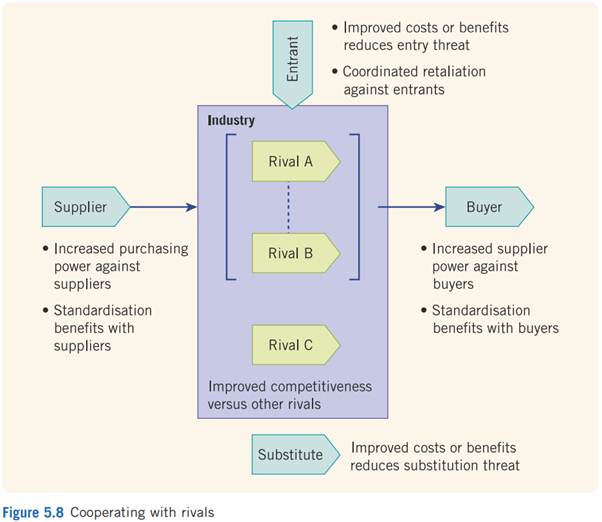