THE RISE OF INDIA’S DRUG INDUSTRY

One of the great success stories in international trade in recent years has been the strong growth of India’s pharmaceutical industry. The country used to be known for producing cheap knockoffs of patented drugs discovered by Western and Japanese pharmaceutical companies. This made the industry something of an international pariah. Because they made copies of patented products, and therefore violated intellectual property rights, Indian companies were not allowed to sell these products in developed markets. With no assurance that their intellectual property would be protected, foreign drug companies refused to invest in, partner with, or buy from their Indian counterparts, further limiting the business opportunities of Indian companies. In developed markets such as Canada and the United States, the best that Indian companies could do was to sell low-cost generic pharmaceuticals (generic pharmaceuticals are products whose patents have expired).
In 2005, however, India signed an agreement with the World Trade Organization that brought the country into compliance with WTO rules on intellectual property rights. Indian companies stopped producing counterfeit products. Secure in knowledge that their patents would be respected, foreign companies started to do business with their Indian counterparts. For India, the result has been dramatic growth in its pharmaceutical sector. The sector generated sales of close to $30 billion in 2012–2013, more than two and a half times the figure of 2005. Driving this growth have been surging exports, which grew at 15 percent per annum between 2006 and 2012. In 2000, pharmaceutical exports from India amounted to around $1 billion. By 2012–2013, the figure was around $14.7 billion!
Much of this growth has been the result of partnerships between Western and Indian firms. Western companies have been increasingly outsourcing manufacturing and packaging activities to India while scaling back some of these activities at home and in places such as Puerto Rico, which historically has been a major manufacturing hub for 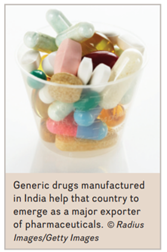 firms serving the North American market. India’s advantages in manufacturing and packaging include relatively low wage rates, an educated workforce, and the widespread use of English as a business language. Western companies have continued to perform high value-added R&D, marketing, and sales activities, and these remain located in their home markets.
During India’s years as an international pariah in the drug business, its nascent domestic industry set the foundations for today’s growth. Local start-ups invested in the facilities required to discover and produce pharmaceuticals, creating a market for pharmaceutical scientists and workers in India. In turn, this drove the expansion of pharmaceutical programs in the country’s universities, thereby increasing the supply of talent. Moreover, the industry’s experience in the generic drug business during the 1990s and early 2000s has given it expertise in dealing with regulatory agencies in the United States and European Union. After 2005, this know-how made Indian companies more attractive as partners for Western enterprises. Combined with low labour costs, all these factors came together to make India an increasingly attractive location for the manufacturing of pharmaceuticals.
The U.S. Federal Drug Administration (FDA) responded to the shift of manufacturing to India by opening two offices there to oversee manufacturing compliance and make sure safety was consistent with FDA-mandated standards. Today, the FDA has issued approvals to produce pharmaceuticals for sale in the United States to some 900 plants in India, giving Indian companies a legitimacy that potential rivals in places such as China lack.
For Western enterprises, the obvious attraction of outsourcing drug manufacturing to India is that it lowers their costs, enabling them to protect their earnings in an increasingly difficult domestic environment where government health care regulation and increased competition have put pressure on the pricing of many pharmaceuticals. Arguably, this also benefits consumers, particularly in the United States, because lower pharmaceutical prices mean lower insurance costs, and ultimately lowers out-of-pocket expenses than if those pharmaceuticals were still manufactured domestically. Offset against this economic benefit, of course, must be the cost of jobs lost in U.S. pharmaceutical manufacturing. Indicative of this trend, total manufacturing employment in this sector fell by 5 percent between 2008 and 2010.

2. Who might have lost out as a result of the recent rise of the Indian pharmaceutical industry?

3. Do the benefits from trade with the Indian pharmaceutical sector outweigh the losses?

4. What international trade theory (or theories) best explain the rise of India as a major exporter of pharmaceuticals?