During the second half of his first year in business, Marvin (see previous case studies) decided to supplement his income by manufacturing and selling magic sets. This was in addition to his fees as an entertainer and any profit made by selling bought-in novelties from Kaboosh Limited. He rented a workshop on 1 March 2012 and employed his assistant Esmeralda’s seven brothers and sisters as production workers. At the end of his first year of business, 30 June 2012, he produced the following trial balance: 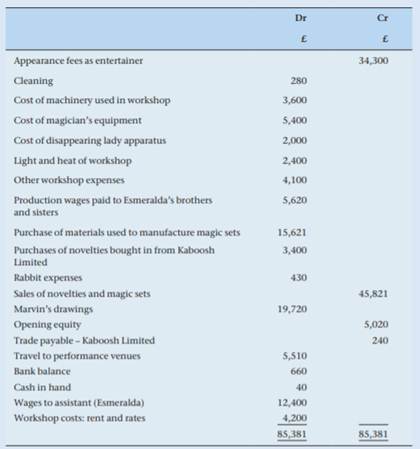 At the end of the year, the following further information was provided:

2 £200 wages was owed to Grimstock, one of the workers on the production line, whilst £100 was owed for light and heat.

3 One-seventh of the rent and rates had been prepaid for the following financial period. Marvin was owed £200 at the year-end by Tanya Turner for a party fee. This had not been shown in Marvin’s accounting records.

Required
Prepare Marvin’s income statement for the year ended 30 June 2012, and a statement of financial position as at that date.