Marvin (see previous case studies) was finding that as the year progressed he was in great demand. He felt he needed an assistant so decided to employ Esmeralda, who had previously been chief inventor at Kaboosh Limited, a company manufacturing equipment for magic tricks and novelties. As a leaving present, that company had given Esmeralda a ‘disappearing lady’ apparatus. Being unsentimental about such things, she promptly sold it to Marvin on 1 December for £2,000. Esmeralda started to appear (and disappear) as part of Marvin’s magic act. After two months in her new job, Esmeralda persuaded Marvin to diversify by buying in items made by her former employers and selling them at the children’s parties to the parents and guests. During the following January, Marvin received a letter from his bank, asking for financial summaries for his first six months in business. January is a quiet month for him, so he spent some time producing the following information: 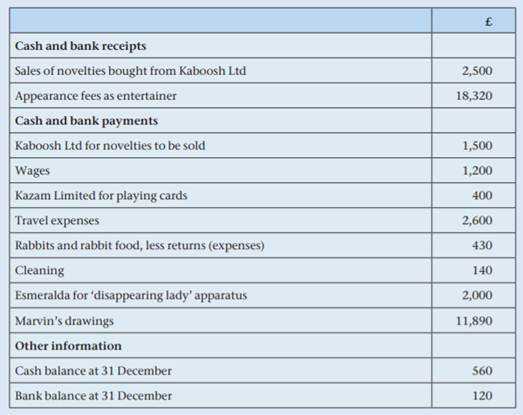 1 The costume, the magic book and the playing cards are to be grouped as ‘Magician’s equipment’ and depreciated at 20% p.a. (that is, over 5 years), straight line method, with no residual value. Note that the depreciation period here is only 6 months.

2 The ‘disappearing lady’ apparatus is to be depreciated at 40% p.a. on the diminishing balance method. The full 6 months’ depreciation is to be deducted, even though it was owned for only part of that time.

3 Marvin owed £100 wages to Esmeralda at 31 December, and had paid £50 in December for a train ticket which was going to be used in January.

Prepare Marvin’s income statement for the 6 months to 31 December, and a statement of financial position as at that date. Note that in the income statement, gross profit on novelties should be calculated first and the fees added to that before deducting the expenses.